A nightmare on Sadovnicheskaya Street 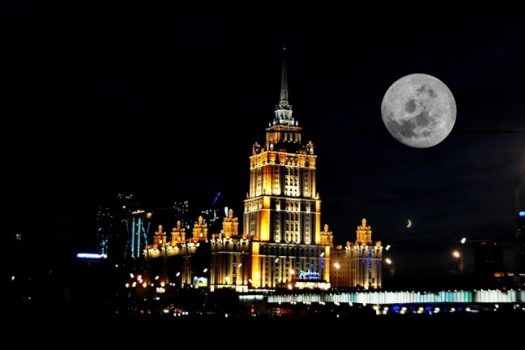 Eight months after Russia’s invasion of Ukraine, if you had sat Putin down at the start of the war and offered him Russia’s position as it is now – struggling to hold on to territorial gains in the eastern third of the country, an international pariah as far as diplomatic and economic niceties go, and reliant on making threats of nuclear strikes in an attempt to demonstrate how little the leader is bluffing – the likelihood that he would have taken it is not down to a willingness to accept anything on offer, given how poor the performance of the Red Army and the general ‘war effort’ have been, but because what happens on-the-ground in Ukraine has never been his primary concern. The real war is being fought worldwide and began a lot longer than eight months ago. To ignore this is to be akin to the first victim in a horror movie – to refuse to take the situation seriously, despite all the advice and evidence; to walk willingly into the dark. Only here, you cannot rewind the film.

Taking Ukraine by force or negotiated surrender would of course have been a Перо in Putin’s ушанка, given his longstanding antipathy towards Ukraine as a sovereign nation and conviction that, as a superpower, Russia has not only the right to pursue its goals, but the compulsion to do so. The seeds for this were laid with the annexation of the Crimean Peninsula in 2014 and certainly, the limited international response to this would have given Putin (newly returned as President) renewed confidence that, if needed, he could pull the same trick twice. However, the Crimean annexation was necessary (at least from Russia’s perspective) in a way that the current wider war is not, for two reasons: firstly, it was a major coup for Putin personally, back in the Presidential spotlight and able to pull off a victory in a manner that his lapdog Medvedev would, or could, not; and as we know from his calendars, for Putin the image is everything. And secondly, the Crimean campaign set the tone for international relations with Russia going forwards: this was a country that had invaded another, seized its territory, and gotten away with it. All parties would surely have to adjust their diplomatic strategies in light of an apparently unpredictable actor, to Russia’s benefit.

None of these factors apply to the invasion of Ukraine. Russia did not need to further prove its willingness to tear up diplomatic norms, Putin faced no challenge to his position or authority (at least not before the military debacles) and even he would concede that waging indefinite war against an entire country, with the tacit support of the EU and USA, is a different prospect from seizing one largely uncontested peninsula. But the argument of the Kremlin thinking it would ‘have a go’ and risk at best, international condemnation and at worse, nuclear war, on the off chance of success, does not hold water. To our sensible eyes, Putin may seem like a madman, but there is method and calculation in everything he does, and the war in Ukraine is no different. The invasion can best be described as a loss leader. If there are concrete gains, such as the ‘results’ of the sham referendums held in the four eastern provinces, then so much the better, but these were never the prime goals.

Instead, Putin is working on the principle that governs horror movies: that you are always more scared when you cannot see the monster. The ground war in Ukraine provides not only a focal point about which the West’s political and media can devote their energies and thus reconfirm – to Russian minds, at least – that the anti-Russian sentiment expressed through sanctions, weapons shipments and so on is entirely valid and thus the Kremlin is doing the right thing by standing firm, it also provides a distraction from three interlinked campaigns. One: the funding of right-wing political parties throughout Europe to push the political dimension (whether in power or opposition) in Russian favour. Two: use an array of puppets, shell companies and complicit crooks to expand Russia’s economic interests and influence throughout the West. And three: conduct a persistent, broad campaign of cyber-warfare to distract, disrupt and devastate as much political, economic, and social cohesion throughout America and Europe as possible. None of these ambitions require the war in Ukraine to be won, but the prosecution of all three is assuredly helped by its continuation. With (whatever may be said) little realistic prospect of either a nuclear strike or an escalation across NATO borders, the ongoing war in Ukraine may be an atrocity, but does not pose an existential threat to the West – and if the measures aimed at cutting Russian energy out entirely succeed, there will be little to be directly scared of. But the monster in the crawlspaces of Western capitalism and politics, and in the vents of cyberspace, that you cannot be quite sure where it is or what is doing… that is an entirely different picture.

But Putin is also using the war as a means of finding out who his friends are, and as an excuse to clean house. This works both internationally and domestically. He has for instance received positive representations from Turkey, Hungary, and India (crucial for both European efforts and international trading partners) while China has been less warm than the Kremlin would have liked – all valuable information for understanding what tack Russia needs to take in its future, and with whom.

Meanwhile, the war is an easy catch-all for stamping out actual, or even presumed, opposition back home. Not only from political and media quarters, but also in the spate of over twenty oligarchs and other business elites mysteriously dying – not least the chairman of Lukoil, Ravil Maganov, who openly spoke out opposing the war – although this is by no means a precondition. If we hypothesise that these are politically-driven murders, then either the Kremlin is fulfilling a genuine need to stamp out opposition or is merely using the war as a backdrop to further its own aims in getting rid of such high-profile figures – the masked killer in a Moscow summer camp with very slippery balconies. Perhaps the collective noun for a group of Russian business elites should be a ‘closed casket funeral’.

So, there is indeed method in Putin’s madness. He publicly enters a high-stakes, high-risk game of finally launching the war in Ukraine, making noise about reconstituting ancient Russian (i.e., Soviet) territorial rights and refusing to rule out nuclear strikes, knowing that this will be where the eyes, and efforts of the world turn. Meanwhile, his three-pronged campaign to disrupt and discredit the West via surrogate and secretive means is successively disbelieved, ignored, or not prioritised – exactly as he would like it. There is no need for a final victory in Ukraine, so long as the stalemate can proceed long enough for the political, economic, and digital disruption to take the West to the point of no return. After all, in cyber-space, no-one can hear you scream.