Belgium and Russia: More than a Mere footnote? 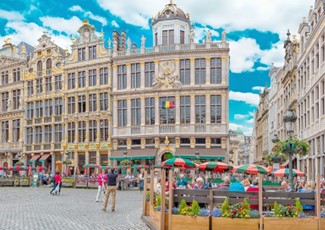 The death of Russian budget supermarket, Mere, in Belgium, just four months after opening can be read either as a cautionary tale of stunningly misreading the public mood on the part of the owners or a surprise that, given the strength of public feeling across Europe to Russian business, it took so long. Either way, Mere’s demise marks it as the latest to suffer the consequences of Russia’s invasion of Ukraine, with its position particularly untenable after sanctions decimated the goods it could provide. However, Belgian-Russian relations cannot be encapsulated in just one business, or even the current time period alone. Mere might have failed, but Belgium remains closer to Russia than many would like to think.

When considering the state of Russia’s relations with Europe, it is often a fallacy to either take the continent (or at least the EU) as one homogenous whole or to focus on what France and Germany, as the ‘big beasts’ of Europe, may want. This not only risks limiting the perspective of the rationale and impact of the actions and sanctions but allows issues not particularly pertinent to either, to slip through the cracks. Belgium represents a prime example of this – and there is a clear distinction to be made between ‘Brussels sanctions’ relating to EU measures, and those purely related to Belgium itself. Chief among these are diamonds. Prior to the invasion of Ukraine, Belgium bought approx. GBP£1.6bn of Russian diamonds per year, and as a high-value product, this deepened ties between Brussels and the Russian elite.

Notably, the state-owned diamond company Alrosa (self-admitted funder of Russian submarines, military expenditure, and Putin’s personal bank account alike) has been exempted from EU sanctions lists in a move widely perceived as Antwerp attempting to both have its cake and eat it. While Belgium insists that this trade is declining, the money involved (and at present the legality) suggests that Moscow is unlikely to let this foothold into European influence and economy go lightly, particularly as the continent-wide effort to cut out all Russian oil and gas appears, against all predictions and probability, to be staying the course. And it is not just diamonds – Belgium has secured a two-year derogation on Russian steel imports, particularly beneficial to local subsidiaries of major Russian firms such as Novolipetsk Steel that can continue to effectively operate in Europe without sanction.

Such deals for the diamond and steel industries cast Belgium in a bad light, not only for utilising loopholes or ‘backroom deals’ against a regime that is now a byword for cruelty and horror, but for protecting itself at the expense of the greater good. All of Europe is making sacrifices to damage Russia, and yet such naked opportunism on the part of Belgium is likely to cause further divisions in strategy between the west of Europe and the east, which does not have the industry to protect yet, is in the literal front line for further Russian retaliation. There is, of course, a debate to be had about the degree to which domestic livelihoods and industries should suffer on a potentially endless basis, but Belgium will do itself few favours internationally by deeming diamonds of greater value than Ukrainian lives. Moreover, if the Brussels-Moscow business ties in key industry sectors remain strong where in other countries they have wilted, then this offers greater opportunity for Russia to use Belgium as its doorway to ongoing power and influence in Europe.

Belgium was better insulated than most in Europe against Russian privation, with imports of goods from Russia accounting for only 1.5% of GDP and the majority of the country’s oil & gas coming from Norway (only 6% from Russia), although the creeping consequences of sanctions have since meant that two-thirds of companies are now experiencing disruption in product supply chain failings and increased costs. Unable to gain a widespread economic purchase in-country, then, Russia has focused on select industries such as the aforementioned diamonds and steel, and generalised old practices of espionage and political influence/interference.

Twenty-one Russian diplomats were ejected from Belgium in March over concerns of ‘threatening the country’s security’ (with links to the highest levels of the Kremlin and FSB), but it is suspected that espionage activity emanating from the Russian Embassy in Brussels continues unabated, even accounting for the general practice of minor trade attaches being spies. Of greater general concern is the continuing active practices through companies such as Alrosa and Novolipetsk of allowing key Russian companies (and by extension, their domestic elites) access to the Belgian economic and political counterparts, and – as reported by multiple sources including Bloomberg and Die Welt – Brussels’ nature as an out of control ‘city of spies’, with Russian and Chinese agents alike flooding the city with disruptive activity, and the government unable to properly deal with the problem.

It is not as though Belgium has a problem with highlighting geopolitical issues. Waves have been recently made with Belgian Foreign Affairs minister, Hadja Lahbib, calling for the EU to reduce its ‘strategic dependency on China’ amid concerns that increasing Chinese stakes in key transportation and manufacturing facilities across Europe would come back to haunt the bloc – comments that went down very badly in Beijing but which Brussels, to its credit, refused to withdraw. In this age of increased polarisation between East and West, Belgium is not afraid of drawing criticism for making a principled stand, which makes its inaction on Russia all the harder to defend on either political or economic grounds – with dangerous consequences for all. If Belgium is not quite the soft underbelly of Europe, it is certainly a chink in the armour. Food for thought – just not from Mere…