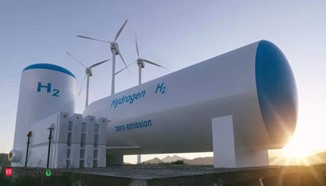 Hydrogen is the simplest element in our universe, formed from a single proton and electron pair. Burning hydrogen produces heat without carbon, with pure water as the only by-product. In theory, it’s the cleanest of fuels. Harnessing its power would be an elegant solution to the energy crisis – and with hydrogen representing 75 percent of all known matter, there would be little danger of exhausting the supply. In practice, hydrogen remains elusive. It takes a vast amount of energy to produce a usable form of the gas in the first place, a process which all too often involves getting one’s hands dirty.

Hydrogen is colourless, but scientists have come up with a veritable rainbow of categories to explain the various methods of extraction. ‘Pink hydrogen’ uses nuclear energy to complete electrolysis – the process of running a current though a substance to force a chemical change, in this case, splitting H2O into hydrogen and oxygen. ‘Yellow hydrogen’ uses leftover electricity from the national grid. ‘Green hydrogen’ is the frontrunner in the race to net zero using solar, wave, and wind energy to separate molecules of water. Yet, in the Middle East’s oil-rich kingdoms, it’s ‘blue hydrogen’ making waves, and drawing western industrialists and diplomats into the boardrooms. Blue hydrogen production is driven by gas. For the six Gulf states, home to a third of the planet’s oil and a fifth of natural gas reserves, abandoning oil will require a long goodbye.

Last October, the Saudi energy minister, al-Saud, announced the kingdom’s ambition to become the largest producer of hydrogen in the world. The project is linked to a development scheme known as Vision 2030, and would be a significant step for Saudi Arabia, and its controversial ruler, Mohammed bin Salman (MbS). The Saudis want to step up blue hydrogen production in the east, in the existing gas fields of Jubail and Jafurah. In the west, the Red Sea coastline could provide the water and wind for green hydrogen extraction – although costly desalination plants would need to be built to remove the minerals and salt from the seawater.

Blue hydrogen is the cheaper option, at US$1.50 per kilo to green hydrogen’s US$5. Both rates are comparatively high. Critics of blue hydrogen point out that it isn’t very ‘green’ – technically, carbon-capture technology allows waste CO2 to be stored underground and reused in other industries, making the process carbon neutral. In reality, leaks of potent methane gas are common. This detail is crucial, with a 2021 study from Cornell University suggesting that when the rate of methane leakage reaches a mere 3.5%, blue hydrogen becomes worse for the environment than burning coal. There would be a lot of pressure on Saudi Arabia to avoid cutting corners in the construction of new hydrogen processing sites, as without proper safeguards any claim towards environmentalism would ring hollow.

How does Saudi Arabia get away with ‘greenwashing’? One answer is that increased demand for energy against the backdrop of war in Ukraine has renewed the west’s appetite for Saudi petrodollars. Germany’s minister for Climate Action, Robert Habeck, visited the Gulf in March, making co-operation agreements with five states and reversing his department’s previous hard-line stance on blue hydrogen. Habeck described his trip as ‘hardly bearable,’ but necessary under the circumstances. It’s also both difficult and dangerous to question the Saudi regime’s glowing pronouncements about their energy ambitions. The main feasibility study for blue hydrogen in Saudi Arabia was carried out by KAPSARC, the King Abdullah Petroleum Studies Research Centre, a government-funded think tank with a vested interest in pushing the idea forward. External analysis of this report has been slight – there has long been a shortfall in fully independent research and journalism in Saudi Arabia, a situation worsened by the assassination of Jamal Khashoggi in 2018.

Recently, the energy and construction sectors have faced accusations of cover-ups regarding the ‘future city’ of Neom, the ‘Milton Keynes’ of Saudi Arabia. The official promotional footage of Neom used an image of Singapore, although most of the real site is still virgin desert. The US$500 billion megacity was projected to be built by 2025, powered by green hydrogen-based ammonia and complete with a ‘Submerged Floating Tunnel Bridge’, an artificial moon, and flying taxis. Yet Neom, years behind schedule, remains a pipe dream. There were reports that 200,000 people have been displaced to make space for the project. At least three Howeitat tribesmen were sentenced to death for resisting the evacuation, a story on which Saudi authorities have refused to comment. Being kept in the dark about the sordid details of projects which might collapse entirely remains a considerable threat for foreign shareholders. But with the Saudi hydrogen industry hoping to attract US$36 billion investment by 2030, businesses may decide that the rewards outweigh the risks.

As the most powerful state in the Gulf, Saudi Arabia continues to dominate the energy market. The surrounding countries face the delicate task of coming up with initiatives that complement Saudi ambitions, while avoiding getting squeezed out of deals in which they are the minority shareholders. Hydrogen has a part to play in this. The UAE, backed by German and French corporations Siemens, Lufthansa, and Engie, favour green over blue hydrogen. Ambitious plans have been made to introduce hydrogen-powered fuel cell electric vehicles (FCEVs) in Abu Dhabi and Masdar City. Such vehicles are already being trialled by the police force, and the roll-out should soon be extended to buses and passenger cars. There are also plans to build a kerosene synthesis plant to convert green hydrogen into sustainable aviation fuel.

While there have been minor clashes between Saudi Arabia and the Emirates – which came to a head in 2021 with UEA pushback to a Saudi-led OPEC oil production cap – the two kingdoms remain close allies. They remain on the same side of the war in Yemen, have both moved closer to Israel, and their differing stances on hydrogen appear to be fuelled by commercial, not political, goals. The UAE’s windy climate is simply more accommodating towards renewables, with the Hajar mountains chosen as a prime site for the country’s first wind farm. A strategic hub of this nature would give a huge boost to the UAE’s green hydrogen sector. And while blue hydrogen may be cause célèbre in Saudi Arabia, it is not state policy, and experiments with green hydrogen continue where possible on the west coast.

It is likely that development across the region will follow a similar pattern, with alliances forming on practical and strategic lines. Qatar, a country much smaller than Saudi Arabia, has no plans to start domestic blue hydrogen production, aiming instead to export its existing LNG reserves to overseas hydrogen plants. Contracts have already been drawn up between Qatar, South Korea, the UK, and Belgium. South Korea was among the first foreign players in the Gulf’s hydrogen game, with Hyundai Heavy Industries and Saudi Aramco signing a blue hydrogen deal in March 2021.

Oman is moving towards green hydrogen. A co-operation between Omani firm OQ, the Kuwait sovereign wealth fund, and Hong Kong’s Intercontinental Energy, is expected to begin work on a large-scale wind and solar farm in 2028. Bahrain and Kuwait are a few steps behind their neighbours and have yet to formally commit to developing hydrogen. In years to come, there is likely to be an increase in cross-border initiatives and joint agreements. Despite some variation in approach, as the existing gas infrastructure across the region is highly transferable to transporting hydrogen, individual states have more to gain through careful collaboration than by seeking to undermine each other’s markets.

Going forward, the biggest challenge will be driving down the cost of green hydrogen and speeding up the timeframe. There are fewer environmental concerns about fledgling plants in the UAE and Oman than in Saudi Arabia, but developers may struggle to attract foreign investors with projects that are unlikely to reap rewards for at least a decade. Falko Ueckerdt at the Potsdam Institute for Climate Impact Research estimates that most green hydrogen products “will not be competitive until 2030” – and businesses who have already entered the ‘blue’ market looking for a quick fix during the world energy crisis are unlikely to change partners at this point. Yet, this may well change if the cost of manufacturing systems like electrolysers are brought down. Until then, mastering the simplest element will remain complicated.