France and Germany: The Kremlin Clock is ticking 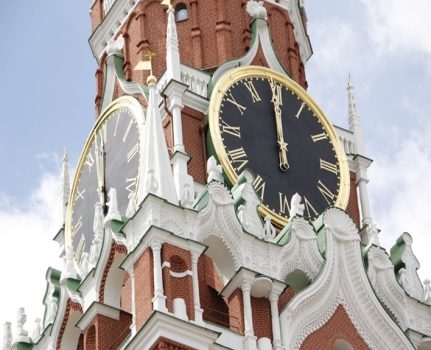 With the planet’s doomsday clock still set at three minutes to midnight, Ukraine might be forgiven for expecting at least the second hand to have ticked onwards a little more. If the prospect of World War III is not enough, then what is? A consequence, perhaps, of the perception that this is still something of a localised conflict rather than the public expression of a broad-scale war for influence and disruption perpetrated by Russia – and more troublingly, the reality that vested interests are either actively or passively too entwined with Russia to admit that they are part of the problem.

Nowhere is this better seen than in the cases of France and Germany. The two have led the EU and Western response to the Russian invasion of Ukraine, both in the political response of pressing sanctions despite the cost, and in organising the supply of defence materiel to Kyiv. Both have declared the intent to disconnect completely from Russian supplies of oil and gas, and neither – unlike the EU rogues of Bulgaria and Hungary – is calling for a watering-down of the overall sanctions package. Indeed, the French Prime Minister states that the aim is to make the prosecution of the war ‘unbearable’ for Russia. Surely, such commitment is unshakeable?

It is not. Back in June, President Macron drew criticism for his call not to ‘humiliate’ Russia and insisting that there must be a diplomatic way out. He is right about the latter, but to suggest that Russia be allowed to walk out of Ukraine with its head held high suggests either a staggering lack of decency, or a fundamental unwillingness to accept the new norms that Russia has itself created. Perhaps, as a statesman in the Napoleonic mode, Macron is genuinely convinced that he can broker a peace, but it is more likely that he is still attempting to have his cake and eat it, which makes him less Napoleon and more Marie Antoinette. Any diplomacy or negotiation arguably cannot simply attempt to reset to how things were, and Macron’s remarks seemed to come with at least one eye on reawakening the relationships and deals with Russia down the line. Plus ca change, as the French might say. Little substantial or lasting change is likely when those at the top are still seeing Russia, in all its dictatorial and repressive might, as an equal and worthwhile partner.

There are numerous instances of senior figures in French politics and business allowing close relationships with Russia to spill beyond what is acceptable. For instance, far-right MEP and head of the Franco-Russian Dialogue program, Thierry Mariani, is under investigation for pushing Russian positions in return for kickbacks (he has denied all allegations). Money laundering in the case of contracts between a French security firm that worked for Macron and the Putin ally Iskander Makhmudov, with subsequent intimations of an Elysee Palace cover-up. The still-unknown extent of Russian oligarchs’ ownership of property, businesses and bank accounts across France was highlighted by Transparency International in July 2022, which stated that such a search was at a ‘standstill’, implying either extreme cleverness on the part of the Russians, or some level of collusion on the part of the French individuals and authorities with a financial interest in keeping the Russians in-country. And, of course, the Front National, whose former leader, Marine Le Pen, was perhaps Putin’s biggest cheerleader outside of Budapest. A genuine ‘sliding doors’ moment if she had won election this year instead of Macron – but Russian covert funding of the extreme right-wing continues regardless of whether they have power or not.

The situation is remarkably similar in Germany. Two names in particular have hit the headlines in recent months. First, the Russian oligarch, Alisher Usmanov, whose Bavarian lakeside property was raided by over 200 officers in a money-laundering investigation in September, and who is facing at least two investigations into his financial and political dealings in Germany, in addition to being placed on the EU sanctions list. And second, chief of the Federal Cyber Security Authority (BSI), Arne Schonbohm, who was fired in October on the grounds that he was too close to members of the Russian intelligence services via an independent body he had set up, the Cyber Security Council, which was regularly targeted by Russian espionage operations. The case of Usmanov is illustrative of a system with insufficient checks or scrutiny to counter those that intend to exploit it, the second indicative of an up-until-now comfort in engaging with Moscow, forgetting that in Russia, the public and private spheres of intelligence always coalesce into a homogeneity.

There are plenty of other examples. Most notably, Russia has focused its attempts on generating greater influence through specific individuals in German business and politics, even after the target may have left direct office. The President, Frank-Walter Steinmeier, was for a long time so pro-Russia that Zelensky refused to allow him an official meeting in Kyiv and was a key proponent of the Nord Stream project from which dependency Germany is now desperately attempting to extricate itself. The initial Chairman of Nord Stream was, of course, former chancellor Gerhard Schroeder, who has been resolute in his defence of Putin and who still carries some sway in German political circles.

As for business, while companies such as gas conglomerate, Linde, and electronics giant, Siemens, have built deep ties in Russia and reciprocated this access to the German market, the biggest Russian stain on the German economy remains the US$20bn money-laundering scheme run through Deutsche Bank between 2010–2014, with the institution apparently entirely unaware that it was being used in this manner. Whether genuine incompetence or blinkered collusion, Germany’s reputation as a financial bulwark against corruption has never quite recovered, and for good reason.

The picture then across France and Germany is adhering to the standard Kremlin playbook: selective targeting and general disruption alike, funnelling influence and financial support down key channels to bring about both short- and long-term objectives, and the weaponization of corruption. What adds the extra frisson is the leadership positions adopted by both countries, and the extra weight and direction their decisions are perceived as bearing. In such situations, Russian avenues for power, influence and control are all the greater; but Ukraine – and the world – cannot afford to wait too long for France and Germany to acknowledge the scale of their problems with Russian interference. The clock is ticking.