Guilty of Fraud in the First Degree 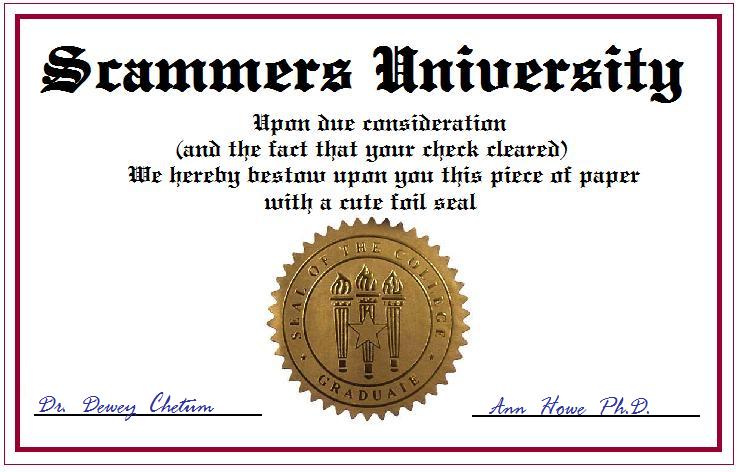 An unintended consequence of the rise and spread of the Internet is the degree (pun intended) to which it allows for falsehoods and lies. Obviously, this is most commonly seen through the doctrine of ‘fake news’, but just as common is the possibility to become anything you want to be online – even if it is something entirely fictitious.

“Degree mills” – fake institutions of higher learning – have been around for many years but the Internet has made the process even easier. You simply choose the degree you want, pay for it, and a certificate (plus any other corroborating material) is downloadable within minutes. Sometimes there is no attempt made at even the semblance of reality (for instance when one considers that Blackpool University is based in Dublin). Sometimes the ‘degree’ will be backed by a highly attractive website and prospectus, to aid in credibility. But the result is the same. A qualification is supplied to someone who has done nothing to deserve it, and whom may be using this as a key block in an entire career of crime.

Where this is driven by the individual, it is an extremely disturbing practice that can have major consequences. There are of course stories where companies in developing markets, hamstrung by ‘new rules’ which dictate degrees for all, using the mills as a quick fix, but in general this does not happen frequently and is driven by a genuine (if misplaced) desire to do good. Where the greatest concern lies is in how degree mills are part of the normalisation of ‘fake’ culture and how, still, comparatively little is done to combat this.

It is estimated that only 20% of UK employers adequately check references and qualifications supplied to them by potential staff. Further, although using a fake degree to secure employment is a crime, the act of buying one (which can have only one follow-through) is not. When there is such laxity in tackling the problem at the source, is it any wonder that fakery is flourishing?

The consequences of admitting an unqualified person into a company need hardly be described. On the one hand there is the pure practical element: someone claiming a highly complex and demanding clinician’s or technician’s degree, for instance, would be a danger to their co-workers and the public in the course of their role. Certainly, there are those that purchase degrees simply as a way to avoid the work and time commitments, and who gamble (perhaps correctly) that their employers will not bother to check.

But just as dangerous are those that use fake degrees as a quick-and-easy way to get inside a company for their own, malicious ends. These are the social engineers taking their art to extremes, the fraudsters and inside men using a fake qualification and reputation to conduct industrial espionage or other criminal activity from within. If, as with the above group, these people can pass unnoticed then the biggest barrier to their intentions simply does not exist. The bad actor is then free to work to their own programme: confidential data theft, file copying, identification of vulnerabilities, the introduction of third-party devices… there is much that can be done ‘inside the tent’ and avenues for entry should be considered with the most stringent security.

This attitude, coupled with a lax approach in verification and an assumption in tending towards the truth, is enabling the culture of fakery to get a foothold in corporate life and puts all those who come into contact with it at risk.

There exist readily available lists of the thousands of fake universities and degree mills that operate online, which should be required reading for any HR director. But more than this, the scandal is illustrative of the danger of a mindset that is blindly looking to box-tick and not considering how, and why, people might be looking to misrepresent themselves. Appropriately enough, for the case of fake degrees, sometimes all that is needed is a good education.