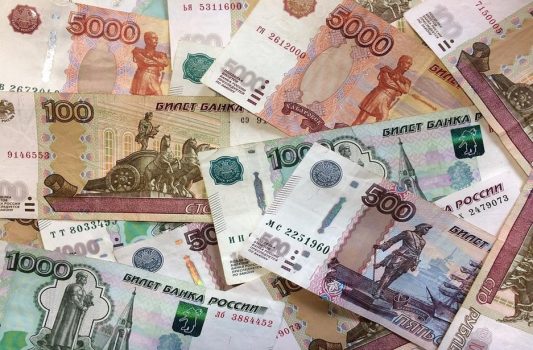 A question: if money makes the world go round, what happens when one country is no longer ‘in the money’? Just as when a moving tectonic plate hits a stationary one: collision. For three months now, the world has been attempting to cut Russia off from a variety of global financial capabilities and services, intended to economically strangle both the nation’s ability to fund its war effort, and prevent the criminal and political elite from hiding their assets. Russia has, so far, adopted an ‘avoidance’ strategy. Now, it is fighting back.

The sanctions that originally crashed into place during the weeks following the invasion were unexpected, not in their forms (asset seizures, forbidden entry, and so on) or their targets (key political/military figures and their cronies) but certainly so in their breadth, depth, and unanimity. The Russians ploughed on as they always had, diverting assets to shell companies beneath multiple layers of anonymity and roping in networks of families, friends, and cronies to disguise their ultimate ownership and accountability. In business terms, the Kremlin announced that oil & gas could henceforth only be bought in roubles, in an attempt to shore up the rapidly tanking currency. But underneath the posturing and trump cards, an unfamiliar undercurrent was swirling, which would cause more discomfort in Moscow than would be admitted. Was the world really willing to ostracise Russia completely? Weaning itself off Russian resources seemed like a far-fetched idea, but it is now the policy of multiple governments. Would major brands really turn their backs on a market that, post-Communism, had been only a source of greater revenue? According to McDonalds, Starbucks, and M&S, yes. And the banning of multiple Russian banks from SWIFT, the international financial transfer & messaging system, was the severest step yet. Not for nothing did Russia call this, previously threatened in 2014 in a response to the invasion of Crimea, an ‘act of war’.

The story so far has thus been one of Russian rearguard action to both safeguard their illicit holdings and attempt to ensure that the economy can remain afloat in the face of the forces arrayed against it. But now, there are signs that the country is gradually changing tactic to act (both overtly and covertly) more aggressively from a financial point of view in a ‘long war’ that will be just as damaging as the immediate Ukraine struggle.

Firstly, Russia is embracing the potential isolation. Not only was it rumoured earlier in the year that the country planned to create its own Internet (similar to that of North Korea and China) to have even more control, but it is also forging ahead with a ‘digital rouble’ to circumvent Western systems like SWIFT entirely and tighten its grip on any businesses, or countries, that are still willing to deal with Russia or hope to do so again in some imagined post-Ukraine future. Second, it is extending its tendrils of influence and covert power to play a continuing role without appearing to – we are hearing from sources in both the Middle East and Russia, that certain unnamed electronic banking entities are coming under discreet Russian control and that the French, among others, are (knowingly or unknowingly) ‘fronting’ this. And thirdly, state-sponsored actors are hacking both traditional banks and the favoured cryptocurrencies of the day, in a sign that nowhere is safe. The hacking group, Conti, have drawn in US $180m in ransomware in recent months – and this is likely to be the tip of the iceberg.

What Russia is essentially trying to do is twofold: firstly, attempting to fundamentally change the shape and nature of the world’s economic system, by forcing or encouraging a pivot towards non-Western exchanges and platforms (both its own and China’s) and setting new currency-based rules for in-country business that no longer depends on the dollar, but also to continue to operate both overtly and covertly to ‘disrupt and destroy’ those elements of the global financial system now denied them. This risks polarising the world further, as such ‘new norms’ may not be reversed even if the invasion of Ukraine is, meaning that business opportunities and requirements of tomorrow will be very different to those of today; and it serves as a grim reminder that – when retaliation measures and talk of ‘acts of war’ are factored in – the economy is, just as with politics, never far away from being war by other means.