Russia and Putin: The end of the road? 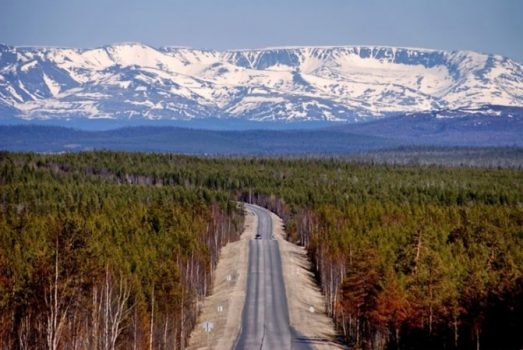 If you drive south-east out of St. Petersburg, you find yourself on the Trans-Siberian Highway, a network of roads eleven thousand kilometres long that is, depending on your disposition towards Australia, either the longest or second-longest highway on the planet. But even eleven thousand kilometres must come to an end, and the prospect of Vladivostok – seeming so impossible and remote when by the Baltic Sea – cannot be avoided forever. And so it is with the reckoning that Vladimir Putin must face not only over Ukraine, but over the Russia that he has built for the past twenty-two years. Is he a symptom of Russia’s malaise, or a cause – and are both man and machine alike finally running out of road?

Although Russia has been at pains to portray itself as a modern, vibrant new nation rather than merely a ‘successor state’ to the Soviet Union, old habits die hard and the bureaucracy, infrastructure and culture of the Kremlin remain as Soviet as they ever were. The Russian way is to assume that one’s superior must surely be so for a reason, and therefore that absolute loyalty is a prerequisite both because taking orders from the higher-ups is the way of things, and because it might help you climb your own ladder.

While this principle has arguably been around since the days of Stalin, the first and ultimate ‘strongman’ who bullied his way to power and was absolutely untouchable for the next thirty years, it has been embraced by Putin to the extent that he is surrounded by yes-men who, while extremely competent at kowtowing to him, are less capable of actually doing their jobs. Consider the cases of Sergei Chemezov (CEO of Rostec) and Sergey Shoigu (Defence Minister) – extremely powerful men in extremely powerful roles, and entirely unsuited to the running of military operations, as the lack of long-term success in Ukraine has proved. Yet they remain, because their most important quality is their absolute loyalty to Putin: men who can be relied on to not only never challenge his own position, but to take the fall when required.

Putin has also enshrined the culture of fear throughout Russia’s personal and professional spheres. It is most openly seen in the repression of media, violence and assassinations inflicted on anyone deemed to be ‘the enemy’ and arrests of anyone who even looks like a protestor, but is equally pervasive, and damaging, throughout corporate and governmental culture. Starting from the aforementioned assumption that whoever is above you in the chain of command has a cast-iron justification for being there, subordinates feed the bosses whatever it is they think their commanders want to hear or attempt to take as few decisions as possible on the basis that they might get it wrong. While this strategy might be effective in the short-term at keeping your job, it is supremely inefficient and damaging in the long-term.

Subordinates who take neither initiative nor responsibility, and whose every action is calculated to please a boss who himself owes his position to blind loyalty over capability, drag an organisation down by default. That assorted Russian military and espionage departments have been publicly castigated by Putin for their failings (telling him what he wanted to hear and being hauled over the coals when these wildly optimistic predictions failed to come true) is not a surprise. That Putin still does not realise, or accept, that his own system is part of the problem, nine months into a war that virtually all departments assured him could be won within a week, perhaps is.

And of course, there is the question of Russian perception, both internal and external; the nation that still sees itself as a superpower and, with the Kremlin existing in an echo chamber of compliant media and supplicant yes-men, convinced that it can still get what it wants if it only shouts loud enough. Tactics are either based around potential threats – intimations to permanently shut off energy supplies – or simply brute-forcing their way through the problem. This worked in Georgia in 2008 and it worked in Crimea in 2014. It has not worked in Ukraine in 2022 and, arguably, will never work again. The long-standing Russian mentality of equating a temporary lack of resistance with a permanent weakness has been exposed and it is plain that the Kremlin does not know how to respond to finding out that it is very much the exception, rather than the rule.

The military is weak, incompetence is systematic and increasingly desperate measures are needed either in practice (the mobilisation that was promised would never happen) or in theory (escalated nuclear rhetoric) purely to ‘stand still’. This is no way to run a government – excepting, of course, if that government is being run primarily for the glorification and enrichment of Vladimir Putin. He has adopted the Vetinari Principle[1] of one man, one vote – Putin is the Man, he has the Vote. But such is the scale of Russia’s failure, and so close the identification of Putin with both the war and with Russia’s direction since the millennium, that when the tipping point eventually comes, it will unavoidably be on his head. And it is coming.

The mobilisation will only result in more Russian sons dying, resources and morale are disappearing fast, the retreat from Kherson is both a political and practical embarrassment and, short of the nuclear option, the only way to successfully prosecute the war is to burn down all of Russia’s bureaucracy and culture and start again – which under the current regime is a non-starter.

Perhaps, the one-year anniversary will be the backdrop to a quiet coup; perhaps the loss of further Donbass territory will prove the final straw for a military increasingly being made to look like amateurs; perhaps Putin himself may be convinced that in order to maintain any shred of positive legacy, the game is up. Even the most ardent Russia-watchers within the Kremlin cannot say for certain. But it is becoming increasingly clear that Putin is coming to the end of his road.

The challenge then, is to examine to what degree the Russians are still ‘Putin’s people’. Not only is there no clear successor (the only other man with comparable experience, Dmitry Medvedev, is himself a nodding-dog and the inner circle of politicians and military men alike might tear themselves apart in the melee), but it must not be forgotten that while Putin exacerbated and exploited the worst excesses of Russian culture and organisation, he only made worse what was already extant. Removing one person cannot change the entire system, and there are difficult discussions to be had about the degree to which Russian political behaviour and culture have contributed to the despotic phenomenon that has now left the country bereft of friends, a moral pariah and with the only way back to acceptance being, it would seem, to rip apart a lot of what makes Russia, Russia.

But as for Putin himself, he may find himself at Vladivostok, on a one-way ticket, sooner than expected.