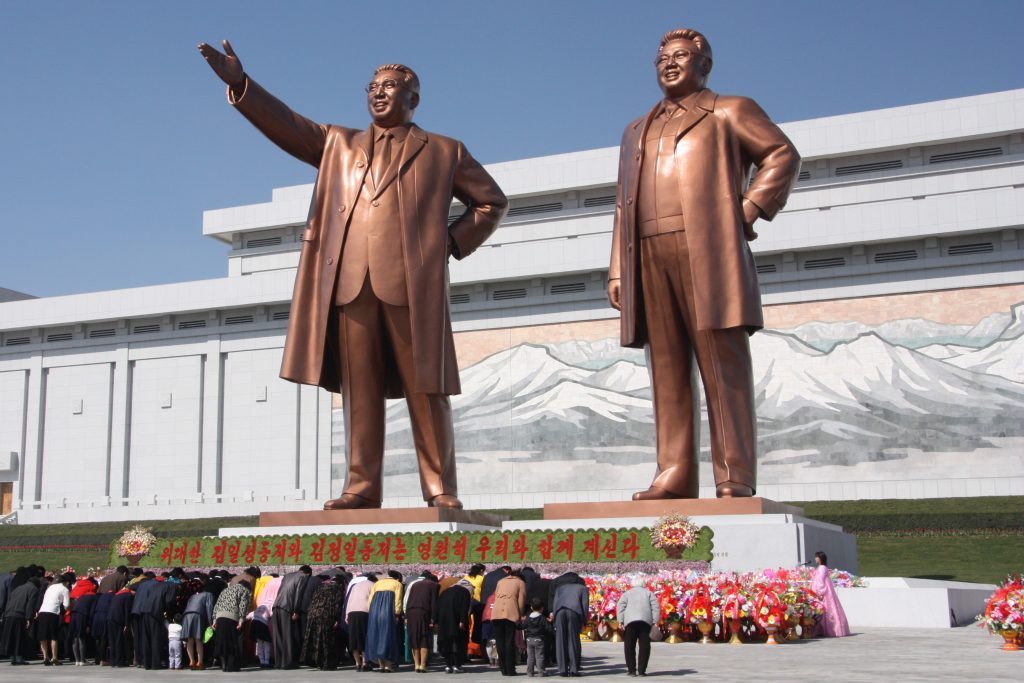 To paraphrase TV comic John Oliver, the world has really come to something when a short madman with bad hair and daddy issues is threatening nuclear doom, and you still don’t know whether it’s Donald Trump or Kim Jong-Un that we are talking about.

For forty years the theory of Mutually Assured Destruction kept the nuclear wolves at bay during the Cold War, with America and Russia both acutely aware that a nuclear attack by one would likely spell doom for them both. The Cuban Missile Crisis may have temporarily ignited fears of this doom, but it is a testament to the (relative) rationality and spirit of both sides that a largely peaceful détente continued for thirty years afterwards until the Soviet Union split under the weight of its own inherent failures.

Russia may have been the ‘riddle, mystery and enigma’ that Churchill spoke of but at the most basic level its motives were understandable: a clash of ideologies with the West that was predicated along political and social lines – perhaps anathema to foreign states, but at the least a viable position to take.

North Korea’s position is much harder to divine. The state is a curious mixture of secular Communism, cult of personality and quasi-religious theocracy with the Kim family at the centre. Ruthlessly focused on military might (it has the highest percentage of military to population on the planet) while the economy and civil society remain embryonic, a viable nuclear option is clearly the number-one priority of the regime – and unlike the Soviet Union, there is a much greater concern that Kim would not hesitate to deploy this. The dream is for a weapon which can strike the continental US, but to even have any defensive capability would allow Kim to better pursue his own internal agenda with a reduced risk of being bombed.

This however brings us back to the question of what North Korea actually wants. Publicly it speaks of destroying the ‘American aggressor’ and of reuniting the Korean peninsula under one banner. But the second of these is impossible (peacefully) unless North Korea dismantled everything about its own state structure, and the first would be only a pyrrhic victory as one nuclear strike on America or an ally would surely see North Korea itself wiped off the map.

It is impossible for Kim Jong-Un not to know this, and one would hope that despite the extensive list of human rights abuses, war crimes and so on against the general populace he would not willingly invite nuclear conflagration. Whether or not he feels he has a choice is another matter. The Kim dynasty, despite its members being anointed as near deities, still relies on the occasional purge to reinforce power and a Kim perceived as weak on the biggest issues of all could be argued to have a short shelf life.

Pyongyang will point to Saddam Hussein and Colonel Gaddafi as proof that only nuclear weapons are deterrents to a full-scale invasion and indeed a viable North Korean nuclear arsenal would almost certainly force international dogs to back off. This state of affairs would not last for long however. Unlike the Soviet Union, there is no internal movement to bring about revolution or change and indeed the world at large does not seem to consider North Korea in the top rank of threats (despite it being on the official state-sponsored-terrorism list). Left unchecked, as a much more unpredictable actor than Moscow (or Beijing) ever were, Pyongyang would have to be dealt with.

So, whether in the short- or long-term, we return to the question: is a nuclear attack on the cards? It is clear that Kim has little to no conception of ‘the brink’ but equally so that the rhetoric of Donald Trump points towards the mantra of nuke first, ask questions later. When coupled with the US’ policy of first-strike, and the North Korean inability to be seen to back down, we could be about to find out what happens when two immovable objects collide.

Responses around the Pacific Rim have been mixed. Japanese bomb shelter drills have been conducted for the first time since World War Two while Guam (mooted this week as a Pyongyang first-strike target) has been defiantly uncowed. China meanwhile has only indicated it would step in to prevent any attack on North Korea.

Despite the various parties rattling sabres at each other to an extent rarely seen, business sentiment remains strong and there is no indication that the tension is causing a slowdown. We have after all been here before. Whether the war of words will escalate into something from which there is no turning back will define not only the future of the region but very likely the world in general. Until then, South Koreans, Chinese, Japanese et al will continue to live as they have done for years – under a cloud of potential ‘fire and fury’. That this is now just as likely to be generated from America, rather than Korea, is ultimately of little concern.