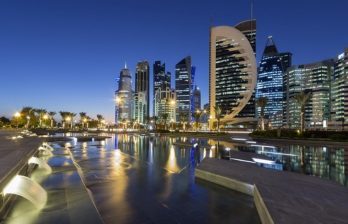 The war in Ukraine continues to cause ripple effects around the world. In purely business terms (although not to diminish the humanitarian atrocities), the biggest ‘story’ has been the world’s pivot away from Russian oil & gas and the search for alternatives. While this has led to curious rapprochements, such as a potential thawing of relations between the USA and Venezuela, most of the focus has been on the Middle East as the substitute choice and a greatly renewed push by Western governments, and companies, to boost their position here. However, nothing is ever as simple as that and to swap one questionable regime for another – to say nothing of endemic corruption – might reinforce the same old problems and kick them a few years down the line.

The response from the major Middle East nations to Russia’s invasion has been muted compared to the rest of the world. The clearest response came from Syria, whose government Russia essentially propped up for most of the past decade. Bashir al-Assad was quick to recognise Donetsk and Luhansk as separatist, Russian territories. Other than that, Kuwait was the only one to issue strong condemnation. The UN resolution calling for an immediate end to the war may have been approved by most states (with Iraq and Iran being holdouts) but this was a general, and unenforceable concession to the narrative. Individual states have been careful not to characterise Putin and his elite as purely responsible, nor to join the sanctioning and moral condemnation. The Middle Eastern states are attempting a very difficult balancing act.

On the one hand, there is quiet acceptance that Putin has gone too far and that standing with him will be a reputational blow that would do long-term damage diplomatically, politically, and arguably, morally. The West has long been a political and economic ally to key Gulf states such as Saudi Arabia and is a key partner in everything from security co-operation to the weapons trade. Some Middle Eastern commentators have been swift to draw parallels between Russia’s invasion and Iran’s perceived attempts to dominate the Middle Eastern discourse, not least through its illegal nuclear pursuit. And, of course, the ability to now gain far more revenues from oil & gas, and other businesses, choosing to withdraw from Russia, is a bonus.

It is also true that the Middle East (even allowing for the fact that it is a region of separate countries rather than a single political/economic entity) could have gone a lot further than it has, and there are multiple factors for this as well. Firstly, existential issues. Both Russian and Ukraine are the largest suppliers of wheat to the Middle East – with neither side sure of the landscape in the coming days, let alone weeks, the region is trusting that its equivocation will allow the supplies to continue no matter who is in charge. Then there is the continued nervousness of what China will do and say. Beijing is the Middle East’s greatest trading partner by far and the fear of damaging this relationship by taking too strong a stance, when China is being similarly muted, is likely staying the region’s hand. And thirdly, the sense that although the Middle East is to some degree beholden to the UK and USA, it is willing to use the geopolitical crisis to ‘play’ various sides off each other to come out with the best deal for the Middle East.

But there is another side to this deliberate vagueness: that the corrupt oligarchs & elite sanctioned in Russia, will need to find somewhere else to do business and new vehicles through which to accomplish this – and why not the Middle East for both? Regimes attuned to sportswashing, nepotism and corruption, and unbothered by a commitment to transparency, are after all likely to appeal to those looking to exchange one corrupt system for another. Whether purely looking to conceal what they currently have, or to actively continue unethical business through new shells and proxies, the wave of ‘Russians abroad’ that will theoretically no longer find safe harbour in the UK or Cyprus, are already being welcomed across the Middle East. The UAE alone already boasts a vast portfolio of real estate, jets & yachts, and shell firms owned/controlled by contentious Russian figures, and it is estimated that this will only increase.

So, while Boris Johnson trumpets a potential new deal for oil & gas supply while 81 Saudis are executed in a single day, business refocusing their affairs to the Middle East from Russia – or looking to enter the markets entirely coincidentally – should be careful. Not only might they find themselves ultimately doing business with sanctioned or otherwise corrupt emigres, but they do so in a jurisdiction that has turned a comparative blind eye to the problems. There always comes a point when the balancing act turns into freefall; and companies need to do everything they can to ensure that they do not go down as well.