Strongman of the Year: Kremlin Edition 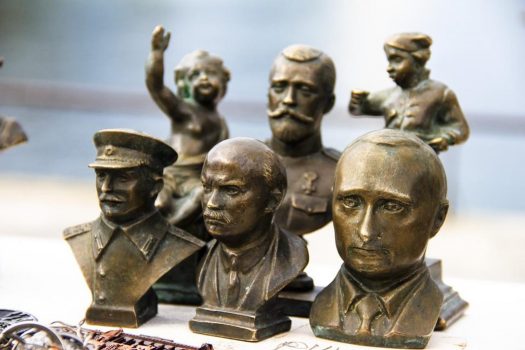 Where does the soul of Russia lie? Some might say in its literature, with Chekhov, Dostoevsky and Tolstoy providing a formidable ‘reading list’. Others might speak for its music, with Tchaikovsky and Rachmaninov among the foremost of classical composers. But, perhaps, there is a third answer, something inextricably bound up in the Russian soul that goes beyond subjective cultural tastes. This is the answer of the strongman that has dominated Russian word and deed for centuries, before either author or composer put pen to paper, and which is once again, dominating conversations as the war in Ukraine rages on.

Once it became clear just how badly the invasion was going for Russia, predictions commenced that Putin could be felled by a coup from within, such was the anger of the military and intelligence services and the concern over the weight and severity of sanctions. These were always fanciful. Russian political and social culture has, from the days of the Tsars (and arguably back to the days of the Grand Princes), been built upon the absolute whims of one man or woman and when things are going badly, you either rally behind them all the more or simply refuse to admit the reality of the situation – a process of doublethink that will be familiar to those who know that Oceania has always been at war with East Asia.

The culture of the Russian strongman permeates through all aspects of society. Although Putin’s election victories are neither free nor fair, and his grip on media and freedoms of expression absolute, one would not have to look too far to find Muscovites that genuinely believe him to be a saviour even without the television telling them to, or who would happily vote for him whatever he said or did. This is the contract of the strongman: give me your undivided loyalty, do whatever I say, and in return, I will give you whatever you need – or at least, whatever I tell you that you need. Moreover, trust not only that I know what is best for the country, but that I am the only one who can achieve it.

This was Putin’s argument when he came to power, and it is worth remembering at this point that, back in 2000, he was far from a conclusive success: a mildly-regarded mayor of St Petersburg with an equally middling career in the KGB behind him; someone who was thought of by the oligarchs who had swept to power and influence under the comedy figure of Boris Yeltsin as someone who could be controlled and puppeteered – an attempt to break the strongman mould. More fool them. Putin simply did better deals with them where he could, cast them out where he could not, and wasted no time in becoming arguably the most powerful Russian leader since Stalin. And unquestionably, his strong hand on the tiller saw Russia pull herself from the post-Soviet doldrums, expand the economy as a BRIC nation and play soft power cards such as hosting the World Cup, to restore Russian pride and her place on the world stage. At least, until the invasion.

But everything comes to an end, and while not even the invasion of another country and a growing list of war crimes is enough to force Putin from office (after all, as a strongman, he can only take correct decisions), eventually, everyone in the Kremlin will have to think about the question of succession. Putin has, so far, not groomed a successor in the manner of the Kim dynasty, nor has he given any public pronouncement on who he would like to take over, and the chances of him stepping aside while living to ‘shepherd’ a hand-picked replacement, are remote. Three questions thus arise: firstly, will we see a free-for-all such as that which followed the death of Stalin and a succession of short-term, incompetent leaders, or will a single figure arise? Second, who will this be? And third, what will this mean for Russia and the world?

The lack of credible names put forward is a testament to how tight Putin’s grip on the levers of power is. Igor Sechin is no longer a major political player, Prime Minister, Mikhail Mishustin, merely does the job because somebody must, and Sergei Lavrov is a lapdog who would be useless off his master’s leash. Perhaps, appropriately for a nation that loves to look to its past, the leading candidate at this stage is Dmitry Medvedev, who served as the only other President this century. While this was widely considered to be because Putin had not yet gotten around to changing the term rules, and he was still the one in charge, being President (even if only in name) will have given Medvedev a taste for the top job and a conviction that he should have another go, this time properly. Moreover, while detractors would argue that he was only chosen in 2008 because he was a pliant patsy, Medvedev would contend that nobody can be President of Russia without being at least partially good enough. And being Prime Minister for eight years after, has given him as good an exposure as any to Russian politics and what you need to succeed.

Being such a long-serving and respected functionary, Medvedev would undoubtedly corral significant levels of political support in a post-Putin vacuum, although with the proviso that such a consideration has never existed and so there is always an element of uncertainty. He could present himself as a unity, compromise candidate neither extreme enough to cause concern domestically, nor weak enough to threaten another ‘lost decade’. Whether he could bring the support of the military and intelligence network is unclear, but Russia does not have a tradition of military coups acting against leaders they do not like – and in any case – deep down, both groups will be aware that Medvedev can hardly be a worse option than Putin, given the prosecution of the war thus far.

And so, to the third question of what a Medvedev coronation would mean? In terms of the war, a full withdrawal is not considered viable: that would be to admit defeat, and a strongman can never be wrong. A frozen conflict along the Donetsk and Luhansk borders, with appropriately manufactured political referendums, would be far more acceptable, although some suspect that this is Putin’s overall goal now anyway. Medvedev would likely take a more measured, softer approach, focusing not so much on exhortations of nuclear threat and questions of Russian existentialism but attempting to build a stronger legal and cultural case for Russian atrocities – he was, after all, considered a more liberal President than Putin, and not without reason. But for Russia as a whole, given that the entire direction of the country (sanctions, boycotts and so on) is indelibly linked to the war, Medvedev may find himself struggling to restore Russian primacy due to errors of strategy and morality made by his predecessor. And in such a situation, the cult of the strongman demands an even harder response, giving him no choice but to double-down on Russian exceptionalism and acutely aware that the more conciliatory Russian leaders such as Yeltsin and Andropov, were each failures in their own way. In this regard, Putin may yet have the last laugh.