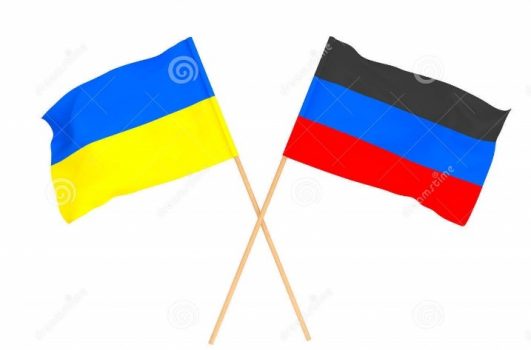 Russia is staging referenda in four occupied regions of Ukraine – Donetsk, Luhansk, Kherson, and Zaropizhzhia. By ‘proving’ that the majority of citizens wish to be a part of Russia, Putin hopes to legitimise his invasion, as he did in Crimea in 2014. The voting in the so-called republics of Donetsk and Luhansk was announced seven months ago but comes at a crucial point in the war for Putin. If Donetsk and Luhansk vote to join Russia, their current ‘volunteer’ units will automatically become soldiers of the Russian Federation. Traditionally, these areas are thought of as pro-Russian, but Russia’s heavy bombardment has alienated some of its former supporters. Kherson and Zaporizhzhia were proudly Ukrainian regions until February 24th, and resistance remains fierce.

These occupied territories extend across 15 percent of Ukraine’s land mass, an area almost the size of Italy. The referendum is perhaps best summarised by a popular cartoon, showing a man hesitating between a box marked ‘yes’ and a coffin-shaped box marked ‘no.’ In Donetsk, citizens have been threatened with losing their jobs if they do not vote. There are reports from all four territories of gunmen travelling door-to-door to get an answer from anyone who is still on the fence.

Condemnation of the sham referendum has been widespread, with neutral countries carefully falling behind the G7’s pronouncement that they will ‘never’ recognise the result. China’s position on Russia’s war has been slippery, but with demand for Chinese imports at a two-year low, foreign minister Wang Yi has asserted that the ‘territory and integrity of all countries must be respected.’ Russia’s long-term ally, Serbia, will not be recognising the result either. Only Belarusian leader, Alexander Lukashenko, is said to be undecided. This is an astute ploy on the part of the dictator, who often uses stalling tactics to improve his country’s position. Belarus has been flooded with Russian deserters since Putin’s announcement of partial mobilisation, most of them waiting to transit to a third, safer country. Given this, and the fact that Belarusian troops have yet to be formally deployed against Ukraine, Lukashenka will have plenty of room to bargain as the votes roll in.

Meanwhile, Putin’s haphazard management of his advisors indicates his increasing lack of control over the Ukrainian campaign. Like a CEO in a company that cannot get out of a rut, Putin has been uncompromising in his attitude towards firing and shifting his advisors around. The latest in a long line of sackings is Dmitry Bulgakov, Russia’s long-serving former Deputy Minister of Defence.  He had been responsible for logistics for Russia’s offensive, which had allegedly been so poorly run that the army had to turn to North Korea and Iran for logistical support. Speculation over Putin’s deteriorating relationship with key military generals, Sergey Shoigu and Valerey Gerasimov, will also continue to be the subject of Western media attention. While the West will be eager to exaggerate the generals’ disillusionment towards Putin, the unity of his leadership team will undoubtedly have taken a hit given the lengths the army is having to go to continue a war that was meant to be over within days. Alongside the latest referenda and conscriptions, Putin’s actions indicate his need to project an image that he is controlling proceedings. At the same time, this lack of cohesion indicates he is scrambling to keep hold of any territories and power he can. In any case, growing disunity among key military generals and constant changing of personnel, will likely impede any further Russian offensive in Ukraine beyond the four territories under its control, even if he somehow manages to get his weakened army and logistics together.

What holds Putin’s regime together, as with all ‘dictators’, is a loyal, well-funded military and intelligence service, who in spite of all the sackings, appear to be keeping him afloat domestically. With low morale from desertions from unexperienced conscripts likely to creep in, widespread protests and desertions across Russia in response to conscription demands, and hostility to the referenda in a country now supported by billions in aid and military backing from the EU and US, Putin’s latest decisions represent a new challenge to the loyalty of his institutions.